The two remarkable things about the 13th Venice Architecture Biennale were its adherence to the theme, ‘Common Ground’ — at least on the face of it — and the similarity of many presentations to previous art biennales including Venice.1 Indeed, several artists seen in recent art biennales were conspicuous: Thomas Demand, Olafur Elliason, Ai Weiei, Peter Fischli/David Weiss and Thomas Struth for example; and, not so recent contenders, Alberto Giacometti and Hans Josephsohn; as well as several filmmakers including Wim Wenders.

Sticking with a theme was a surprise for one who has only previously seen Venice art biennales where it’s de rigueur for countries to take great pride in being individualistic, whether in a pavilion in the Giardini or a hired palace elsewhere in the city. Any coherence was only to be found in the Central Pavilion or in the Arsenale’s Corderie where it’s usual for the biennale director to select the art — although in recent years that work too has been loosely wrapped.

Directed by British architect David Chipperfield, ‘Common Ground’ focused on people: people in cities, suburbs and country; shared ideas and collaborative projects; green economies and ideals; utopian notions of co-operation and the freedom to choose how you live and what you get. Changes that can be made for and by people in order to experience common ground were explored. ‘I invited my colleagues’, said Chipperfield, ‘to examine what we share over what distinguishes us . . . and in so doing to demonstrate that the quality of architecture depends on common values, efforts and visions’.2

As it happened, most of the exhibiting countries, architects and firms closely followed this invitation, not only in the Arsenale but also in the national pavilions. A change that did not go unnoticed. Several commentators mentioned it including in TheObserver: ‘This year’s exhibition . . . has a coherence sadly lacking in some previous shows’.3 So coherent was it, that if a country or other group exhibit strayed from the theme it stood out. Unlike recent shows where the singular and spectacular were celebrated, engaging with the theme altered the mood of the whole event. ‘Chipperfield’s team have created an almost icon-free, antiheroic show’, commented The Independent.4 Refreshingly, ‘Common Ground’ gave viewers the opportunity to consider the efforts of architects as part of an ongoing investigation of intellectual, social and physical ideas. The theme clearly had the potential to constrain egocentric architectural heroes. It mostly did. Easily ignored in the mix were a small group of countries which persisted with architectural models and coloured photos of brave and admirable structures.

While the architecture biennale is far younger than the art event it too has developed into a mega production, with scores of presenters in the Giardini including the Central Pavilion (59 exhibits), the Arsenale (58) and throughout the city (28). Not yet quite as widespread as its visual arts sister — the 2013 art biennale, apart from the Giardini and Arsenale, had over 80 exhibits in other city venues — Common Ground was a little easier to get around. 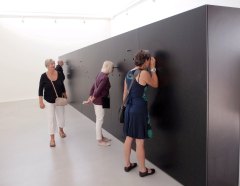 In the national pavilions the representations of some countries were predictable while others were a delight. Denmark, Germany, Brazil and Russia were impressive, as was Croatia (in the Arsenale). Several others were quite lame, perhaps due to less cash. All in all, the pavilions were a mixed bag. Possible Greenland in Denmark’s pavilion took on what a future development of Greenland might look like given the scenario of dramatic climate change, while Germany’s Reduce/Reuse/Recycle presented large-format photos that effectively demonstrated the reuse and recycle of buildings and materials in the Republic. Peep, by StudioMK27 (Brazil), was a voyeuristic installation, a black structure with spy holes at various heights, featuring a luxury Sao Paolo villa (MK27’s ‘V4 house’, 2011) and its inhabitants filmed by 16 cameras — short videos of the life inside and social dynamics that define a building. Russia’s dazzling installation, i-city, turned the domed roof and walls of its pavilion into a constellation of QR (Quick Response) barcodes each one linked to detailed data — accessed by tablets given to visitors at entry — on past and present projects including secret gated-cities and military infrastructures.

In the Australian Pavilion the collaborative work, Formations: New Practices in Australian Architecture, was a little too conceptually and visually complex to be easily digested. The project could only really be appreciated through the accompanying 188-page publication which detailed 33 practices in three categories (Multi-modal Formations, Collaborators and Motivators) with six of these being selected for the pavilion. The six were complex enough, with practices ranging from robotics to broadcasting, humanitarian action to education. The media to present these ideas was diverse: posters, models, installations and video projections. ‘We and our collaborators . . . [were] determined to send off [Philip] Cox’s much maligned temporary pavilion with dignity’, said creative directors Anthony Burke and Gerard Reinmuth.5 Braking free of the building, artist Richard Goodwin had installed a cable line from the vertical skylight on the canal side (the back side) of the pavilion to a tower across the canal — coupled with a water-taxi excursion around the Giardini.

Below the skylight a large, rectangular opening in the canal side, led visitors to the water’s edge via a small platform, something not seen before, that completely opened up the structure. Perhaps a liberty granted as this was the second to last time the pavilion would be used; the last time being for the 2013 art biennale. The previously neglected canal aspect of the site will be effectively rectified with Australia’s new — black on the outside, white on the inside — pavilion designed by Denton, Corker, Marshall with completion anticipated in time for the 2015 art biennale.

A short walk from the Guardini the old Arsenale (the Cordierite and Artigliere) had never looked better or more dynamic with an impressive use of space, interesting videos and photography, sculptures, models and objects (many of them handcrafted) and beautiful installations, including some highly charged political commentaries. Near the entrance, Thomas Struth’s attractive and quiet, large-format photos, taken between 1978 and 2010, demonstrated the effects that the built environment can have on communities and vice versa. The Norman Foster designed Gateway installation followed with a cacophony of sound, multiple images and bright lights created in collaboration with filmmaker Carlos Carcas and artist Charles Sandison. Further into the Cordiere the wonderful, recreated ‘Caracus cafe’ by Urban-Think Tank and Justin McGuirk — winner of the Golden Lion for best exhibit — actually served fine Venezuelan food as a way of bringing people into an exhibit about an unfinished 45-story skyscraper which had become an informal community of squatters. Croatia’s entry was a physically delicate but politically loud installation with multiple, hanging translucent screens showing film images of protesting crowds in public spaces. The green economy was literally revealed in Italy’s sustainability-minded pavilion which took the four seasons as its theme, seeking ways to promote growth, both economic and horticultural — including energy and food production.

Well away from the Giardini, Life Between Buildings at Fondazione Giorgio Cini — a non-profit arts centre on San Giorgio Island — was a highlight. Here, the Louisiana Museum of Art (in collaboration with Danish company Gehl Architects) presented a well-produced, multi-channel video projection on a large circular screen to vividly illustrate Jan Gehl’s vision for cities on a human scale. The installation revealed the creation of places where a diversity of people could meet, bringing life to urban spaces. While the focus was previously on Nordic cities, innovations for Times Square and Melbourne alleys (to list a couple) to reclaim public space, were included. Put simply, the aim was to establish better and more extensive spaces for pedestrians and cyclist moving quite slowly, rather than the common predilection for vehicles travelling at 60-plus kph on multi-laned roads that divide cities. 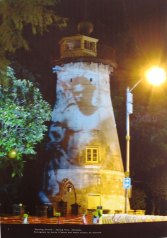 Back closer to the Arsenale in a modest Castello venue was Finding Country, an exhibition which examined the contest between the traditions of Australian Aboriginal space (country) and European space (property). Common, but contested ground perhaps. The focus, using various media, was an eight by three metre drawing of the city of Brisbane — located on Turrbal people’s Country — superimposed with around 50 submissions revealing the ground and architecture that’s been lost, at the same time calling on non-Indigenous architects to engage Aboriginal Country.

Given the prevalence of high standard presentations throughout Common Ground it was easy to imagine that many of the architectural companies and sponsors were, despite economic problems in many counties, quite cashed up. Notably there was a focus on people rather than on big monuments to egos. The question was more like: What can be done to rejuvenate old buildings and cities? This reflects the number of wonderful old European buildings that are crying out for renovation, reuse and renewal coupled with the issue of shrinking funds. Some of the multi-channel video installations were visually compelling and rich with social and political commentary. And, refreshingly, a great number of exhibits were simply accessible and enjoyable. ‘This [architecture] biennale’, said Jay Merrick, ‘is a fine tonic, the least corporate and the most interesting for at least a decade’.6 Common Ground was a revelation and its success could be put down to good planning and judicious use of resources, human and monetary, beautifully presented but not preaching.

Ian Were is an arts writer and editor based in Brisbane. The 14th International Architectural Exhibition, directed by Rem Koolhaas, is on from 7 June to 23 November 2014 at the Giardini and Arsenale venues.